2019 RIA Conference: Going Long on ESG – What’s the State of Play and Where Are We Heading?

The following is a brief summary of the 2019 RIA Conference Session “Going Long on ESG – What’s the State of Play and Where Are We Heading”?

There is a lot to be excited about in ESG in 2019: unprecedented global growth, traction in some of the most unlikely markets in the world, asset proliferation, and more. These are all indicators of scale and mainstreaming.

At the same time, while growth and opportunities are well worth celebrating, Jantzi was not there to raise his glass. In an honest and compelling speech on the state of the industry he acknowledged the good, and then got right down to business on the bad and the ugly.

The evolving understanding of fiduciary duty has been one of the most important drivers of ESG adoption. Any experienced ESG practitioner can recall a time when the word “fiduciary” would shut down any conversation about ESG integration. “I don’t take for granted the fact that in most places around the world now, that doesn’t happen,” said Jantzi, acknowledging the progress that has been made.

However, despite the growing dialogue, there are still some serious challenges. For starters, the more that ESG attracts attention, the more it ruffles the feathers of some very powerful institutions and people. South of the border, an opposing tone has recently surfaced – one that Jantzi calls the “fiduciary chill” – referring to the political tactics of the Trump administration that caution investors on ESG, and question whether it fits within the country’s fiduciary guidelines. This could mean a hard hit to fundamental shareholder rights by preventing ESG-related proposals at proxy meetings or restricting other forms of shareholder engagements.

While these debates may seem isolated to the United States, make no mistake: “This is the biggest and deepest capital market in the world. What happens in the US affects all of us, especially here in Canada”, said Jantzi, reminding the crowd of the real risks at hand. Nonetheless, pondering the many reasons why materiality has become so politicized is not nearly as important as deciding what to do about it. If you believe that ESG issues are not political issues, but rather fundamental investment concerns, then Jantzi has some advice: “You have to participate. We all have to participate. And I don’t care what you do, who you do it with, or how you do it. None of us is too small to have a voice”.

Get Your Data and House In Order

Many criticize the ESG realm for the lack of standardized disclosures. Things look worse when different rating firms come out with different ESG scores. What people tend to forget, as Jantzi argued, is the fact that different ratings are the result of different methodologies. “There is strength in diversity… that’s not a problem. That’s a signal of a robust and maturing industry”.

But the issue around ESG data and disclosure is real – and Jantzi will be the first to admit it. “We need to find an ESG equivalent to the IFRS,” he said. While organizations like SASB, GRI, and the TCFD have laid a strong foundation and deserve recognition, there’s still a lot of work to be done.

Pace vs. Patience – The Climate Struggle 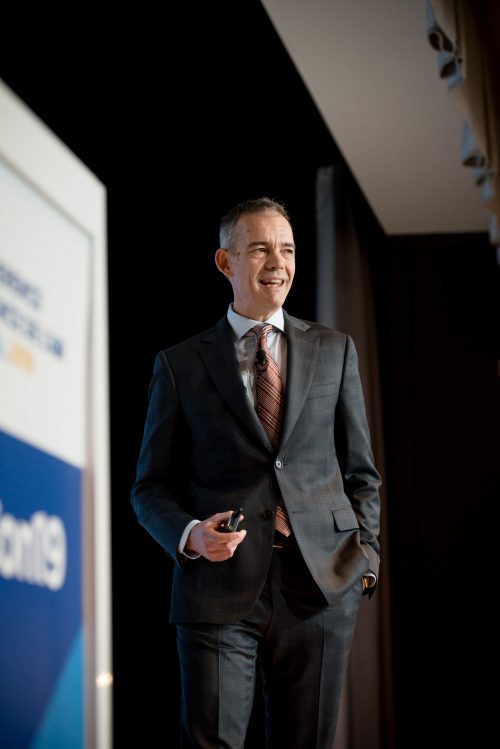 Meeting the 2030 Paris Agreement targets worldwide will require the investment community to commit an unparalleled amount of capital towards the low-carbon transition. Investor initiatives like Climate Action 100+ and uptake in transition-oriented market instruments such as green bonds offer lots of encouragement, but do they represent how investors really feel?

Investor behavior shows mixed attitudes. Saudi Aramco, the largest and lowest-cost producing oil company in the world, with proven reserves as large as the next 5 biggest competitors, recently released a bond prospectus for the first time, looking to raise $10 billion. International investors practically fell over themselves trying to lend money, as demand soared above $100 billion. Due to the nature of the sale, the identities of all interested parties remain unknown to the public.

To Jantzi, “we deserve to know who bought these notes”; and not for shaming and blaming, but in order to have a civil conversation about the realities we are currently facing. If investors accept the consensus around climate science, what does this mean for their carbon budgets moving forward?

Jantzi admits he doesn’t have all the answers, but he is sure of one thing: “We’re going to have some diverse opinions on the table, and they’re not going to be necessarily easy ones.”

Disclaimer
The views and opinions expressed in this article reflect those of the speakers and do not necessarily reflect the view or position of the Responsible Investment Association (RIA). The RIA does not endorse, recommend, or guarantee any of the claims made by the speakers. This article is intended as general information.